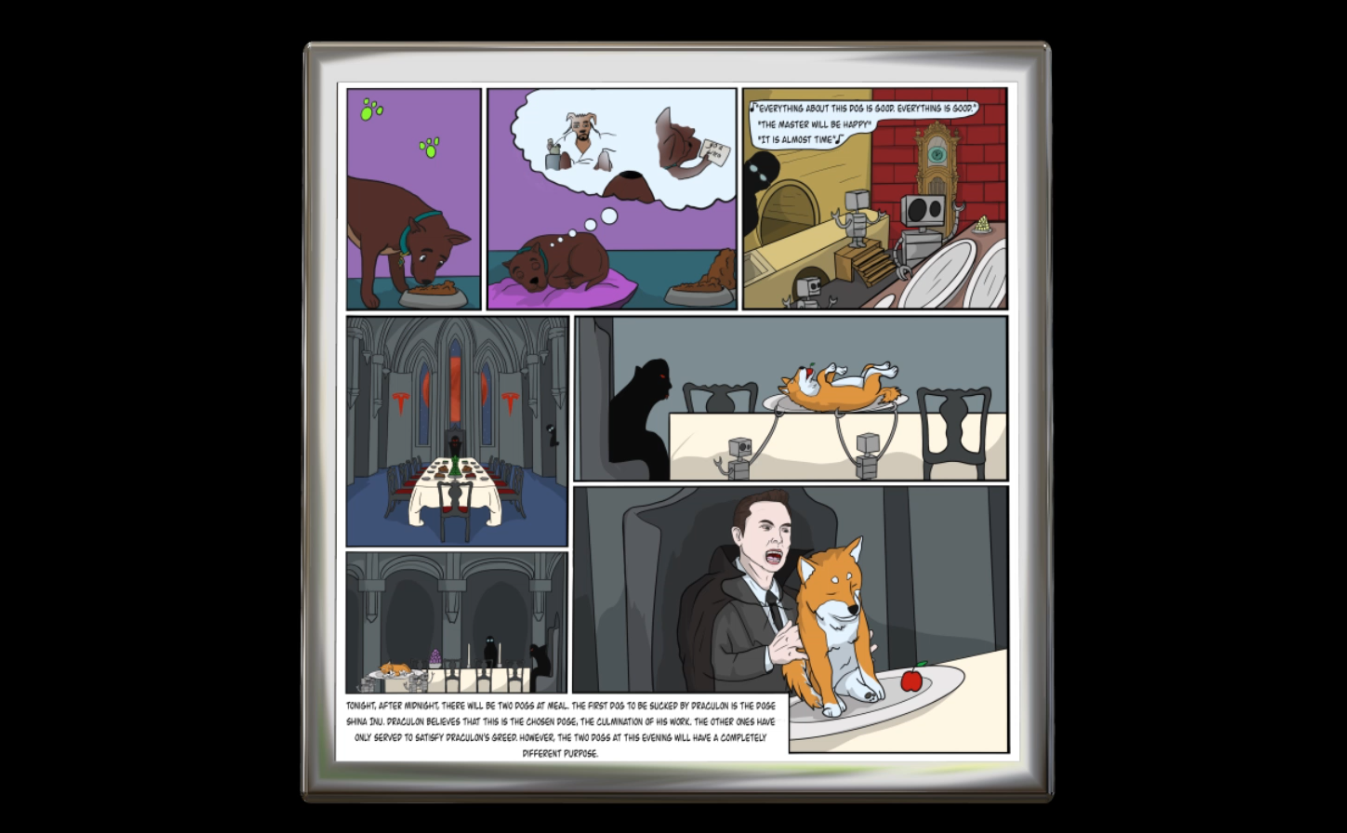 Scoobi takes a handful of kibbles in order to sustenance, but although he finds them very good at first sight, his instinct tells him that something ain’t right, without being able to clearly define the problem, so he decides to not eat too much of them.

Tired after all these adventures, Scoobi decides to go and lie down on the pillow and starts to fall asleep… He starts to dream about Snoop Doge, and also the piece of paper with written on it “Yo a bitch” floats in front of his snout. Is it a sign?

Meanwhile, in the kitchen… While Scoobi is dreaming, the army of little robots is preparing a royal banquet. There is a clock that shows 23:30.

The dishes are laid out, and there is a free place on a big oval tray. The robots’ army sings in heart: “everything in the dog is good, everything is good…” “The master will be happy!” “It is almost time.” There we can see standing the hidden twin brother “Boredulon Musk” (the scientist).

Meanwhile, in the main room… A gigantic table is dressed in the imposing main room of the castle; on two huge columns behind, you can see the Tesla logo doubled representing the canines of a vampire. In the middle, there is a large window showing the full red moon. At the end of the big table, there is a royal throne. The shadow of a Draculon Musk where we see only the red eyes and the canines is seating there. On the side, we see the hidden twin brother “Boredulon Musk again.”

Back in the waiting room, a detachment of the robots’ army is slowly putting Scoobi on the oval tray while the other part of the army group sets up the first dish with a Shiba-Inu and an apple in his mouth. Scoobi will definitely be the second dish.

Back in the main room, Draculon Musk is looking forward to the fabulous meal. He remembers the dogs of the Bones Gang and says to himself that the serious things are beginning finally.

Tonight, at midnight, there is two dogs for the meal. The first dog that will have his blood sucked out by Draculon is the Doge Shina-Inu. Draculon thinks that this Doge is the chosen one and will be the culmination of his work. The other dogs have only served to satisfy Draculon’s greed. However, the two dogs of this evening will have a completely different purpose.

The Shiba-Inu is delivered by the robots serving army on the dining table. Draculon takes the Shiba-Inu at arm’s length and bites it to suck his blood shamelessly.